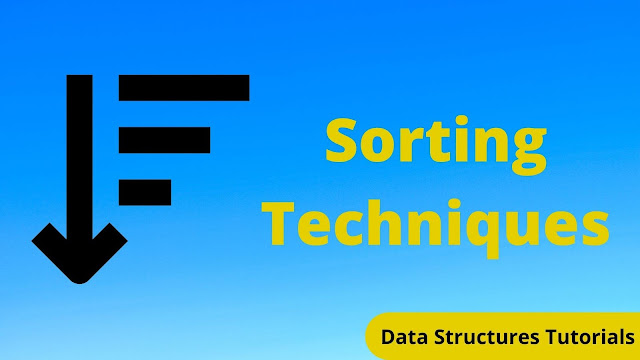 If we have enough memory so that the data that we want to sort can be accommodated in the memory then internal sorting methods are used.

In the selection sort method, sorting is started from the first element and searches the entire list and finds the minimum value in the list, and then places it in the first position. again the search is start from second place and finds the minimum value and then places it in second place. this loop starts from the first element of the list and ends at the second last element of the list.
In terms of complexity, the selection sort has an O(N*N) best case, O(N*N) average case, and O(N*N) worst-case complexity.
Learn about
selection sorting in c programming

In the bubble sorting technique the data file is passed sequentially several times. each pass consists of comparing each element in the file with its successor and interchanging the two elements if they are not in proper order.
In terms of complexity bubble sort has O(N) best case, O(N*N) average case, and O(N*N) worst-case complexity.
Learn about
Bubble sorting in c programming

In the insertion sort technique, the sorts begin with a set of records by inserting records into an existing sorted file. in this technique, one temporary variable is required to hold the value during swapping the values. in the first pass 1 comparison is made, the second pass makes 2 comparisons and the last pass makes N-1 comparisons.
In terms of complexity Insertion sort has O(N) best case, O(N*N) average case, and O(N*N) worst-case complexity.
Learn about
Insertion sorting in c programming

As we know merging means combining two things to make one. so in the merge sorting divide and conquers method is used. first, the list of values is divided into the sub-lists so that each sub-list cannot be divided further. after that each sub-list is sorted and then again combined to make the full list. only we need is a temporary list of the same size as the list that we want to sort.
In terms of complexity, Merge sort has O(N log N) best case, O(N log N) average case and O(N log N) worst-case complexity.
Note – Merge sort is a type of external sorting.
Learn about
Merge sorting in c programming

The Quicksort technique is also used divide-and-conquer technique. in this technique, we first find the element that divides the array into two parts in such a way that the elements that are in the right subarray are greater than the dividing element, and the elements that are in the left subarray are less than the dividing element. then these two sub-arrays are sorted separately.
In terms of complexity, Quicksort has O(N log N ) best case, O(N log N ) average case and O(N*N) worst-case complexity.
Learn about
Quick sorting in c programming

In the heap sorting technique we use a tree structure heap. heap is a type of binary tree. and then we construct a heap by adjusting the array elements and then repeatedly eliminate the root element of the heap by shifting it to the end of the array and then restoring the heap structure with the remaining elements.
In terms of complexity, Heap sort has O(N log N ) best case, O(N log N ) average case, and O(N log N ) worst-case complexity.
Learn about
Heap sorting in c programming